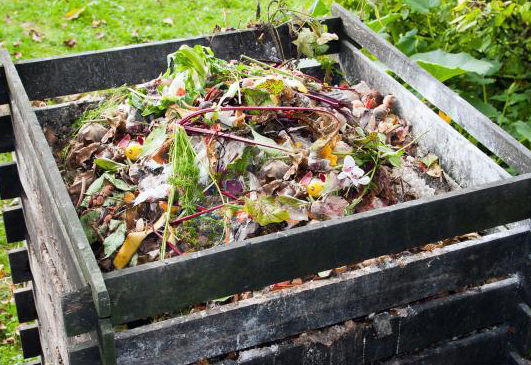 It has the ability to help regenerate poor soils. The composting process encourages the production of beneficial micro-organisms (mainly bacteria and fungi) which in turn break down organic matter to create humus. Humus–a rich nutrient-filled material–increases the nutrient content in soils and helps soils retain moisture. Compost has also been shown to suppress plant diseases and pests, reduce or eliminate the need for chemical fertilizers, and promote higher yields of agricultural crops.

The composting process has been shown to absorb odors and treat semivolatile and volatile organic compounds (VOCs), including heating fuels, polyaromatic hydrocarbons (PAHs), and explosives. It has also been shown to bind heavy metals and prevent them from migrating to water resources or being absorbed by plants. The compost process degrades and, in some cases, completely eliminates wood preservatives, pesticides, and both chlorinated and nonchlorinated hydrocarbons in contaminated soils.

Composting organic materials that have been diverted from landfills ultimately avoids the production of methane and leachate formulation in the landfills. Compost has the ability to prevent pollutants in stormwater runoff from reaching surface water resources. Compost has also been shown to prevent erosion and silting on embankments parallel to creeks, lakes, and rivers, and prevents erosion and turf loss on roadsides, hillsides, playing fields, and golf courses.

Using compost can reduce the need for water, fertilizers, and pesticides. It serves as a marketable commodity and is a low-cost alternative to standard landfill cover and artificial soil amendments. Composting also extends municipal landfill life by diverting organic materials from landfills and provides a less costly alternative to conventional methods of remediating (cleaning) contaminated soil.

Back to Plant Care <<