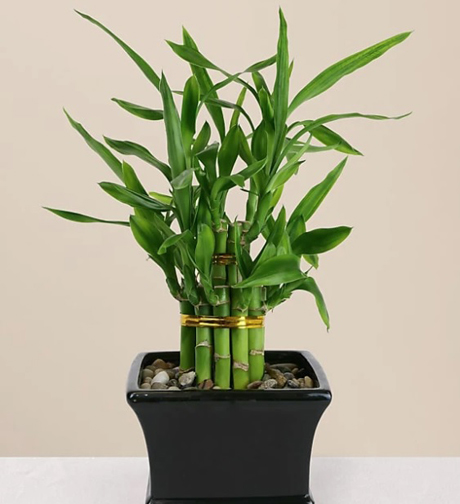 Known for centuries as Lucky Bamboo, the plant is not a bamboo at all (botanical name: Dracaena) but a resilient member of the lily family that grows in the dark, tropical rainforests of Southeast Asia and Africa.

Keep water fresh by changing it every week, and always keep water levels at approximately an inch from the base of the canes.

Lucky Bamboo prefers plenty of indirect sunlight and room temperatures at 65-70o. Although opinions differ on feeding, your Lucky Bamboo is a living organism, so it makes sense to occasionally add a mild solution to the water such as African Violet fertilizer. Since feeding can control growth, small amounts of fertilizer will keep the plant at a manageable size.

Along with its ease of growth, Lucky Bamboo has long been associated with the Eastern practice of Feng Shui – or the bringing of natural elements of water, fire, earth, wood and metal into balance within the environment. Lucky Bamboo is believed to be an ideal example of the thriving wood and water element, with the addition of a red ribbon sometimes tied around the stalks – which is believed to “fire” the positive flow of energy or chi in the room. The number of stalks also has meaning: three stalks for happiness; five stalks for wealth; six stalks for health. Four stalks, however, are always avoided – since the word “four” in Chinese sounds too similar to the Chinese word for “death”!