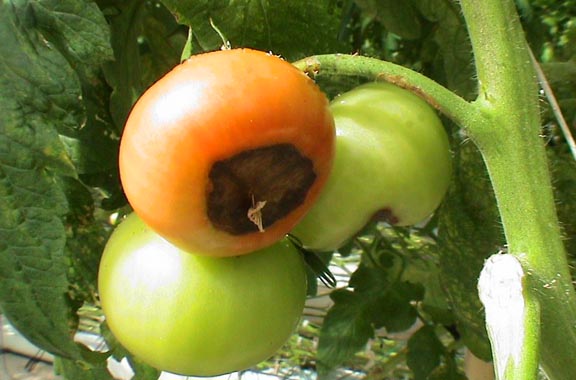 Blossom end rot is a physiological disorder that is caused by a lack of calcium uptake from the soil and transfer to the fruits during dry weather. The problem is costly to many tomato growers and disappointing to home gardeners. Peppers can also be affected, although the disease is much less common on peppers than on tomatoes. Research in Florida indicates that excessive magnesium, potassium, sodium, ammonium salts or a deficiency of soluble calcium salts causes a decrease in calcium uptake, thus favoring development of the disorder.*  Rapid early growth accentuates the problem because it tends to increase the calcium requirement per unit of time.

The first symptom of rot is a slight water-soaked area near the blossom end of the fruit. The lesion soon darkens and enlarges in a constantly widening circle until the fruit begins to ripen. The decaying spot may be merely a speck or it may involve half or even more of the tomato. Secondary fungi may inhabit the black area. Although a sudden lack of water is the principal cause of blossom end rot, excessive soil moistures early in the season may smother the root hairs and cause blossom end rot to occur during sudden hot weather. It may be more serious on the windward that on the leeward side of a field and more common on staked tomatoes than on bush types. Generally, blossom end rot is most common on the first fruits to turn red.

Since blossom end rot is so closely related to adequacy of water supply, an important control is to regulate the moisture supply in the soil. The land should allow good drainage during a wet period. If drought occurs, cultivation should be very shallow to reduce water loss and irrigation should be used. Hoeing or cultivating should be performed no closer than one foot from the plants to reduce root pruning. Appropriate amounts of fertilizer high in superphosphate and low in nitrogen should be used (1-3-1 ratio).

In the greenhouse, transplants should not be grown too quickly nor should the plants be too old and subjected to severe hardening before transplanting. A steady growth rate as a seedling and as a field plant will discourage much of this problem.

If irrigation of any kind is available, it should be using during periods of hot, drying winds. Start to irrigate at the beginning of the dry spell. Mulching, which serves to maintain an even level of soil moisture, should be practiced where feasible. Mulch with black plastic or grass clippings to reduce moisture loss and to control weeds. Tomatoes and peppers planted unusually early, while the soil is still cold, are likely to have the first fruits affected by blossom end rot. Consequently, a delay in planting until soil warms up helps to reduce the problem.

Adapted from the Cornell Cooperative Extension, 2001